THE AIRBORNE DIVISION OF THE GREAT WHITE BROTHERHOOD

"The Ashtar Command is the airborne division of the Great Brother/Sisterhood of Light, under the administrative direction of Commander Ashtar and the spiritual guidance of Lord Sananda, our Commander-in-Chief, know to Earth as Jesus the Christ. Composed of millions of starships and personnel from many civilizations, we are here to assist Earth and humanity through the current cycle of planetary cleansing and polar realignment. We serve like midwives in the birthing of humanity from dense-physical to physical-etheric bodies of light, capable of ascending into the fifth dimension along with the Earth."

"We of the Brotherhood of Light, and we who serve in the Intergalactic Fleets and Cosmic Federation Councils, come forth to bring you knowledge for a most eventful and confusing transition ..." 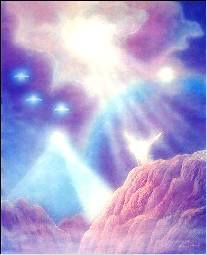 The Ashtar Command is an etheric group of extraterrestrials, angels and lightbeings and millions of "starships" working as coordinators of the activities of the spacefleet over the western hemisphere. Under the spiritual guidance of Sananda (the Most Radiant One), the ascended master who walked the Earth incarnated as Jesus the Christ, Ashtar, the commander of the galactic fleet and representative for the Universal Council of the Confederation of Planets, is currently engaged in Earth's ascension-process.

There are 144,000 lightworkers called Eagles connected to the Command. That is the minimum of souls required for the ascension process. These Eagles are a group of souls who don`t identify with a special planet. They know they are one with all, and that they are Christ (fundamental to any discussion of New Age Christology is the recognition that New Agers distinguish between Jesus, a mere human vessel, and the Christ consciousness (variously defined, but always divine, and often a cosmic, impersonal entity)).They serve like cosmic midwives in the ascension process; the birthing of humanity from dense-physical into physical-etheric bodies of Light, capable of ascending with the Earth into the fifth dimension. Lightwork is incorporating Jesus' message of Love and Light into our daily lives, ultimately connecting with our Higher-Self.

"The other forces that are influencing our thinking, collectively and individually, may turn outto be beings in the spiritual dimension who have been watching our progress and who have reached a level of concern for our well-being. Sound ominous? Not really. The spiritual dimension that excists beyond the realm of our five senses is appearing to us individually and collectively to wake us up out of the addiction to complacency, fear, denial and greed that is keeping us trapped in psychospiritual dysfunction. These other dimensions want Earth to flourish as the wonderful,incredibly rich source of love, life and learning that it has always been. Until now most of ushave been unaware of that invisible boundary between these planes of excistence. At this pointin evolution, with the survival of the planet and all her species at stake, it's time for the veil to be removed. It's time to bring in the cavalry."
- James Redfield, 'The Tenth Insight - An Experiential Guide'

The Ashtar Command is now using Internet Relay Chatfor realtime discussions between all of us on aspiritual mission on Earth. Whatever your cosmicspiritual journey join us any night or day onchannel #Ashtarcommand. To get there add to yourirc server list-irc.superlink.net 6667.This isa superchat server. So to all Loghtworkers around theplanet enjoy meeting others here on #Ashtarcommand.Sunday nights we have a moderated chat with focuseddiscussions,channeling by different beings,and a sharingwith questions and answers. The Sunday night sessions startat 8:00 P.M. EST from Connecticut,U.S.A. .This channel is a registered channel on Superchat.

Meesages from the Council of the Lords of Light

On Behalf of Mother Earth

Sananda on ascension by Eric Klein (excerpt from 'Crystal Stair')

Ashtar on Space Friends, Earth Changes and The Importance Of Discernment

The Mass Media Introduction to The Ashtar Command